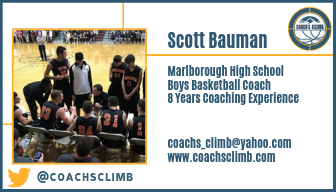 The best players I have had the opportunity to work with have shared these characteristics:

It doesn’t take too long to find the individual that stands out among the rest. There often is a natural presence to their game – fluid, unphased, and eager to make an impact. The energy in the gym tends to gravitate towards the best players, often garnering the eyes of the coaches and players alike.

From a player-development standpoint, it can be easy to get enamored with the talent. Our responsibility as coaches is to overlook the superiority of ability in comparison to the rest of the gym and identify how to help them continually develop. While at the same time be smart enough to stay out of their way to naturally figure things out independently.

From a person-development standpoint, the best players did not always result in being the best leaders of the team. When they are the best leaders, it does make the coach’s job that much easier. Regardless, if the best player embraces a leadership role or not, he/she still stands out as one of the most influential members in the locker room. The corollary responsibility for coaches is to figure out how they can make the most impact to improve the rest of the team. Is it by captain recognition? Is it creating a style of play that caters to them? Or by coaching them the same as everyone? Whatever the method, #CoachingBestPlayer is central to any team’s success!

Point blank, I coach my players differently based on a variety of variables – personality, E.Q., I.Q., & commitment level – to name a few. My intentions, however, remain the same in an attempt to ignite a drive for improvement and identify how to optimize their strengths. Considering the best players share a lot of common characteristics I’ll speak largely in generalities.

Match their energy. If I have an athlete that wants to put in the extra time, I want them to know that I will find the time to work with them. It could come from rebounding, watching film, or at the very least keeping the lights on late after practice. Investment levels often are accompanied by someone else sacrificing to accommodate that drive. Don’t be the extinguisher. Talking leadership, the easiest way for someone to make an impact despite personality type is through a contagious work ethic. I will take positive peer-pressure for others to put in additional work any year.

The best player reached a level of superiority because someone else worked it out of them. Maybe it came from an older player at the park, maybe a sibling that kept beating them in the driveway. Either way, somebody exposed them at some point that drove them competitively to improve. Don’t enable complacency.

Stay in Their Corner

Typically when things aren’t going well, they are the first to recognize it. As much as we look to challenge them to continually improve when it comes time to compete; I want their best version of themselves. They are often at their best when they are instinctive and natural. So when things go south I want to simply get them to trust in their abilities to get back to when they are at their best. Now, if productivity appears to be lacking due to effort or willingness to compete, there usually is much of a difference for the star player to the remainder of the team – sit to figure it out. Depending on the personality type is how I give that feedback to them why they have been replaced for their apathetic play.

Anyone that spends that much time in the gym, let them know how much you appreciate their time. We are getting paid as coaches to do a job. At the moment athletes remain amateurs, sacrificing leisure for devoted time to improve. Sometimes we lose sight of the difference in investment levels for youth, high school, and collegiate athletes because their priorities largely do not align with ours. We expect that every athlete cares about the game as much as we do, and should be spending a comparable amount of time. It is rare when that type of experience exists. When you have an athlete that does have a passion for this game nearly as much as you, it can be a really fun coaching experience. Keep perspective on the stage of life they are in and embrace the time they spend, but encourage experiences that may be conducive to future life opportunities.

The game often comes slower to them because of their advantages – skill, size, or both. At some point depending on their intentions to continue to compete, those advantages may begin to fade and level out. How are we still teaching them beyond a skill-standpoint to sustaining a competitive advantage? I tend to ask a lot of questions to my entire team usually for the purpose of gauging comprehension, or feedback. Asking a lot of questions or creating hypotheticals for the best players challenge them intellectually to think beyond their natural ability to take over. A lot of this will come in the form of reducing unnecessary steps that they can get away with at lower levels or finding efficiency through angles or observation of player tendencies.

Examples (And these are just personal opinion):

I don’t care what level you coach every athlete wants to be coached up. Allow time to cultivate relationships to provide a blueprint on best approaches to #CoachBestPlayer. Time will develop trust. Trust will enable hard-coaching to demand the most out of them. My style is for the best player is through manipulated autonomy. To paraphrase Jeff Van Gundy,