“Players other than the man defending the ballhandler must slow the advance of the ball, of course. And it’s not enough for the rest of the team merely to run back quickly on defense, though that is the second-best strategy. The best strategy is for the teammates to make a quick transition with purpose. That helps the ballhandler prevent the two things that will speed up the opponent’s attack: getting the ball to the middle or making a quick pass up the sideline.”

Something that can incessantly irritate a coach, is non-revenue generating fouls. Nonprofit fouls occur from:

These personal fouls can accumulate that can create rotational issues for coaches making substitutions. More importantly, they rack up the team fouls that provide unearned points that could be the difference in close possessions games. While I think winning the number of fouls in the box scores plays a role in effectively winning the game, there are times when fouling can prove to be beneficial. This is considered “fouls for profit,” when a player uses a foul (better earlier in the game) to prevent easy scoring opportunities. Take the following examples:

These fouls are to prevent clear scores or to set a tone against an opponent. Defensive presence is tangible when activity levels are used to disrupt confidence, scheme, and rhythm for opposing team’s offense.

The primary tasks of transition defense are to:

The most important word to take away from transition defense is contain. Regardless if a shot-clock is a factor in your arena containment can do a couple things: establish a set defense and disrupt the initial alignment of the offense by preventing the ball to be centered. 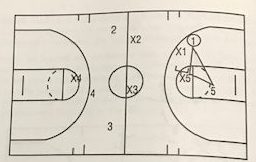 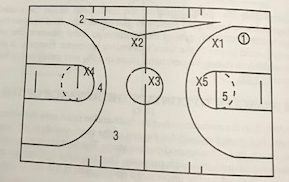 Alternatively known as “loading to the ball,” the triangles are designed to be in place to provide help for the primary defender on the ball, in addition to discouraging any immediate passes to advance the offense up the floor. Similar to the primary and secondary break, transition defense is intended to be structured that will allow personnel to flow into assignment from backcourt to half-court based on philosophy. So, what you might end up seeing are different shapes of those triangles per coaching instruction.

Either way, the defense will attempt to keep the ball on the sideline where the bulk of the defensive help is positioned. As we progress into the next portion of the book we will begin to discuss the “swing spot,” which covers ball reversals and different ways of defending the middle of the floor.